If we had to say what it is that makes Silvia Camporesi great (besides her talent), we would definitely point to her methodology and her stubbornness. We met with the Italian photographer in her home studio, a charming bohemian refuge in the heart of Forlì. It’s full of items she’s collected from around the world and has her photographs hanging from the walls.

She told us how, after studying philosophy, she took her first steps into the world of photography, and with limitless perseverance managed to gain unanimous approval from both the public and critics. She describes herself as in love with Italy and its landscapes, many of which she has yet to discover.

Or perhaps yet to create.

YOU WERE BORN IN FORLÌ, WHERE YOU STILL LIVE AND WORK. HAVE YOU EVER CONSIDERED MOVING OVERSEAS OR TO A BIG CITY?

I’ve always traveled a lot. I’ve done projects abroad, but the choice to remain in a small city, with big open spaces, has been essential to me: in my work I need to have calm and space, to have everything under control, and above all to have everything at my fingertips – and a big city can’t offer me that. I need that vacuum, and then I need to fill myself up. That’s when I go out, I go away, I leave. For me it’s important to have this base; if I’ve managed to do so many things over the years, it’s because I had the space and the kind of setting that allowed me to do so.

YOU’VE UNDOUBTEDLY SCRATCHED YOUR ITCH TO TRAVEL – AT LEAST WITHIN ITALY – WITH THE ATLAS ITALIAE PROJECT: A JOURNEY TO DISCOVER THE WONDERS OF FORGOTTEN AND ABANDONED TOWNS IN ALL THE REGIONS OF ITALY. IT BEGAN WITH THE IMAGES OF PIANOSA, IS THAT RIGHT?

Yes, the curator of the European Photography Festival of Reggio Emilia, Marinella Paderno, invited me to do a project for the 2014 edition because she knew that I had been focusing on abandoned places. She proposed that I take photos on the island of Pianosa as there is a deep historical connection between Reggio Emilia and the Tuscan island.

Pianosa is still famous today for having been home to a maximum-security prison that was closed at the end of the 1990s. With the closure of the prison, the island emptied out. For example, this is one of the abandoned houses in the town.

She points to a photograph hanging in her studio: a room with paint peeling from the walls and a window through which one can see just a glimpse of the sea.

I was the first photographer who was authorized to enter the building, which was a real thrill for me. I went three times in the span of only a few months. It was winter and there were guards who followed me around. Today Pianosa is a nature reserve, an incredible place, which hasn’t been ruined by mass tourism or vandalism. That job then paved the way for me for everything that would become Atlas Italiae, because at that point I was still in the research stage.

THE METHOD YOU USED TO DEVELOP ATLAS ITALIAE SEEMS SCIENTIFIC AND METICULOUS – DOES IT COME OUT OF NECESSITY, OR ARE YOU METHODICAL BY NATURE?

It’s my method by default. At the start of my career I met someone who shaped me: he instilled in me the idea that the artist – like a laborer – must work every day, clocking in and out on an imaginary timecard. If you don’t do it you should feel guilty. He used to say to me: “Leave some hours free during the week and rest on the weekend, like any other laborer.”

At first I had a daily outline, split between various activities, and then it became my routine.

For this job in particular, pre-production was fundamental. There was little time, tons of places to shoot, and no certainty about the kind of light there would be…

AND HOW DID THE RESEARCH DEVELOP?

I began by looking region by region; initially I used the Internet, then I bought a lot of books. But finding a place on the Internet doesn’t mean anything. You need to know the current conditions – climate has a big influence on abandoned buildings. So we needed to find someone who understood the places as they were and who knew whether they could be visited or not. I posted on Facebook asking people from the place to contact me, or I called district offices. In the beginning there were times when I drove for kilometers for nothing, but then I honed my technique for surefire success. It was a team effort – in fact, there is an entire page of acknowledgments in the book!

With the new project I have fewer problems because these are preserved places. The beauty here is in discovering that these amazing and little-known places exist. Once you’ve found them, you just have to figure out the hours and the permits! 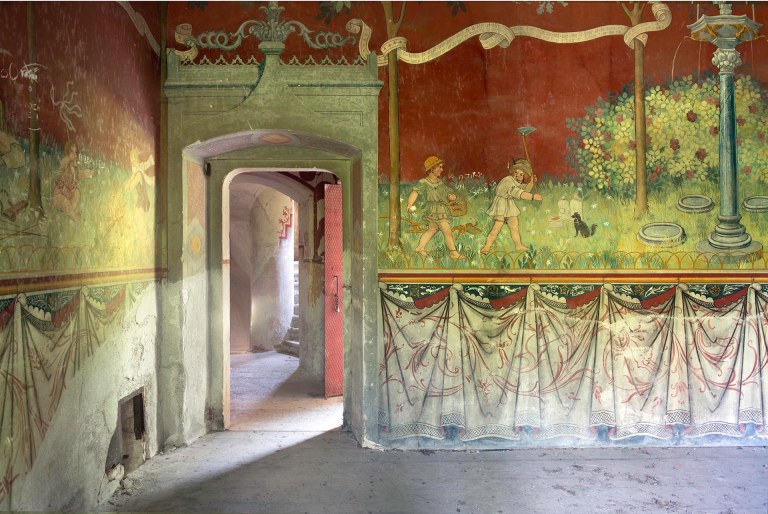 DID YOU MANAGE TO DISCOVER – OR TO RECONSTRUCT – THE HISTORY THAT WAS HIDING BEHIND THE PLACES YOU VISITED?

Entering an abandoned place without knowing its history is strange; it’s something cold. It’s important to understand why it was abandoned. One truly interesting story is that of Castello Nuovo di Rovasenda.

She points to a photograph propped up on the table, fresh off the printer.

It is about a cloned castle! The Rovasendas were an ancient noble family from Piedmont. The story goes that, in the late 1800s, a descendant of the family was cast out and, with his wife’s inheritance, constructed a castle just like that of the family (which dates back to the 12th century) just a few meters away, reproducing the same stucco, the same frescoes, and the same halls. Upon his death this second castle was totally abandoned because in reality it was a copy from the 19th century without much historical value. The ridiculous thing is that when I was searching for information I spent loads of time trying to understand this mess, until I realized that there were two castles – the copy and the original. It’s one of the most absurd stories I’ve uncovered.

ACCORDING TO THE WRITER PAOLO RUMIZ, “ABANDONED PLACES ADOPT YOU.” WHICH PLACES HAVE YOU BEEN ADOPTED BY?

There is a photograph where a ship appears right in the middle of the landscape of the Marche region. It is a ship of bricks and cement that seems totally real, buried there amid the hills, with vegetation that tries to overtake it. You can see it from the road, you lift your eyes and you almost lose your bearings because it is so strange. The ship used to have a restaurant, and then a dance hall, but it has been closed now for 30 or 40 years. I wasn’t able to enter so I only photographed it from the outside. But it really was a sight to see!

The thing that really strikes me about some places, like the cloned castle or like this ship, is the strangeness. 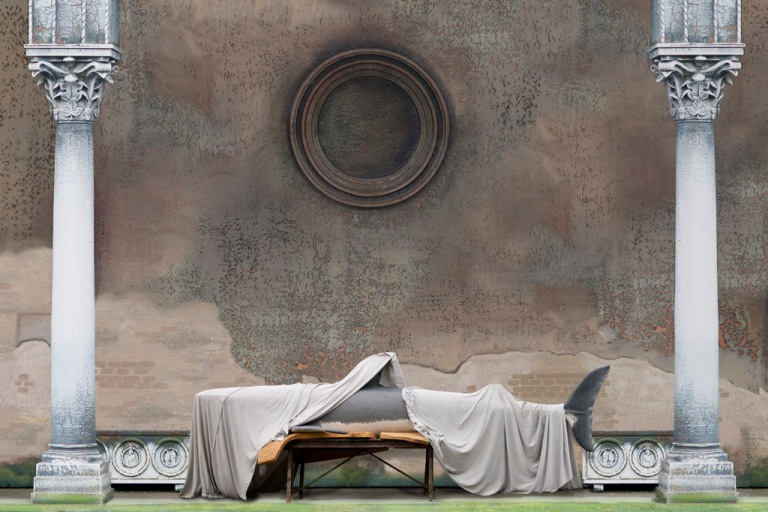